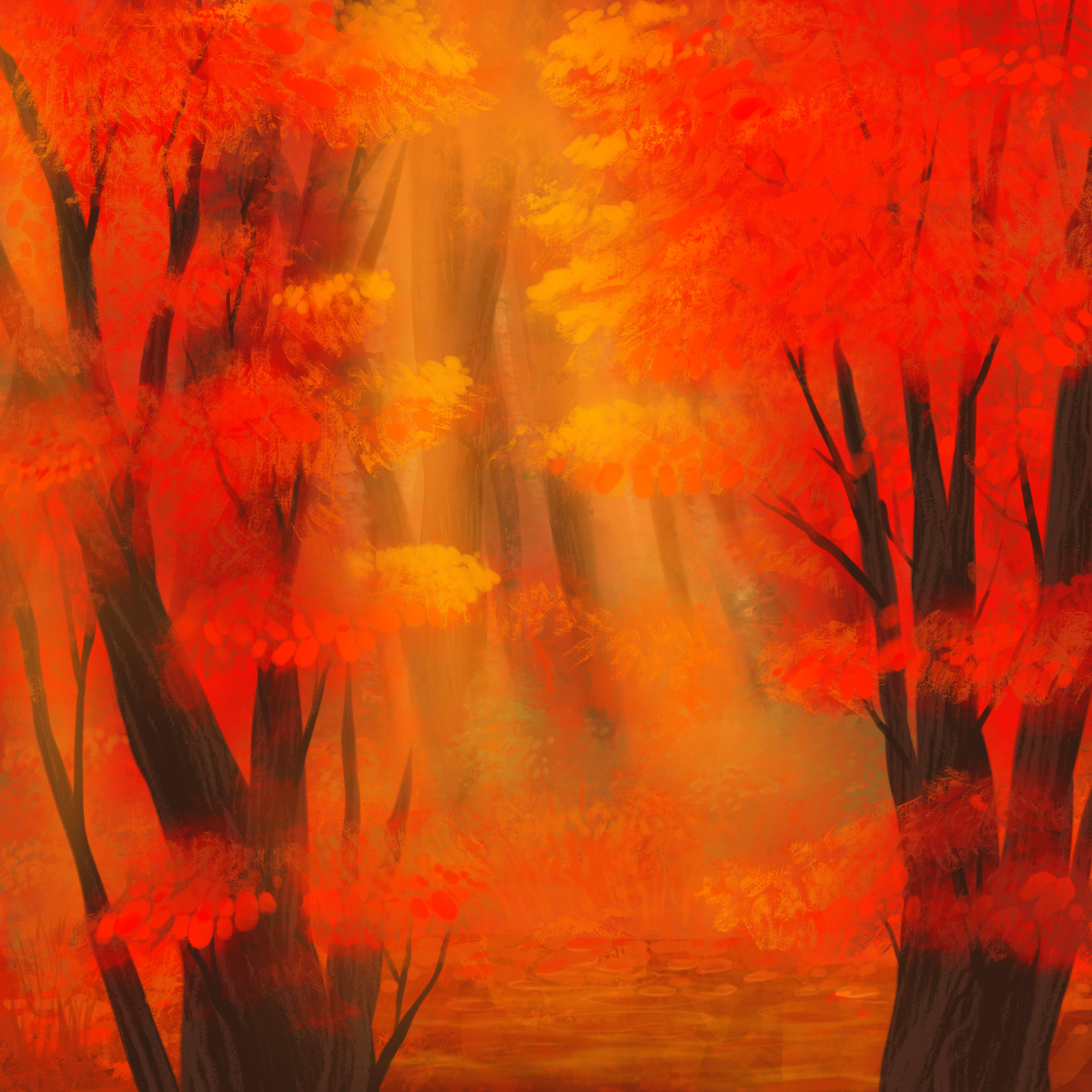 He was on the shorter side, even for a child, with dark skin and bright red hair. It was typical of any Irrit, but quite far from what was expected of a St. James. His red eyes weren’t helping anything, either, looking more feral than human. Elliot glared at the child, who glared back in turn; Clearly he was just as happy to be here as him.

His father patted the strange boy on the head, formally introducing him. “This is Rory, and he’ll be staying with us now.” He sent a stern glance towards Elliot which quickly melted into his normal beaming smile. “You’ll be touring him through the house, Elliot.” Elliot scoffed, wanting to protest, but his father continued, “Just like we talked about.”

They had talked about no such thing. Rather, they had talked about keeping the kid out of the house. The St. Jameses were a prestigious family and the admission of a mistress was already enough to tarnish the line. It was normal for them to take as they pleased, but their public face was another matter. Even if the bastard didn’t have a mother now, he could just stay with whatever surrogates the Irrit could come up with themselves. The leisurely way his father had mentioned her in front of his wife made Elliot think there were even more out there–hopefully not towing children of their own. That he would call for one of his bastard children to reside in the estate made Elliot’s blood boil. He scowled at the child but kept his voice pleasant, “Very well. Let me show you through the estate.”

The child nodded and smiled, eyes still red. Apparently the color of Irrit eyes revealed their emotions; He would have to research that properly once he found a place to lose the kid. He whirled around and started walking through the halls without beckoning for the child to follow. “Go on then,” his father urged the child. Light footsteps told him he followed close behind.

Elliot casually pointed out all the amenities that a child like him would never have the luxury of knowing in any normal situation. The sauna connected straight to a hot springs and supplemented with vitamins perfect for the skin, the library full from floor to ceiling with manuscripts from all worlds and ages, the ballroom with glittering marble tiles and exquisite chandeliers–all of them just a small indication of how much wealth the family controlled. He looked back to see how star-struck the child would be, but he seemed completely disinterested, eyes passing over the lavish features as if they were stones in the desert.

“You had better be thankful that you even get to look at these things,” he hissed. The child simply looked at him with the same red eyes and gave a half-hearted sneer. Elliot felt like punching him, but held back. If he was unimpressed, he would just take him to the best part of the mansion. Even a stupid child would recognize the power of the family from the stables. He pulled the child out of the estate, down the garden path, and finally to a tall building carved of ivory and quartz stones. It was the most expensive construction in the estate. Elliot motioned for the stable hands to open the gate and led the child in.

He heard a gasp from the kid and finally Elliot felt comfortably smug. The child ran ahead and stood in front of a feral dragon pen. It was an older dam, covered in scars from her younger days in the arena. Other than those blemishes, she was a beautiful beast, with scales gleaming beautifully in the soft light of the stables. It craned its neck around to sniff at the boy, saw Elliot, then immediately swerved for pets. The boy looked crestfallen as Elliot patted and cooed at the dragon. He looked to the other dragons, but all the ferals were ignoring him and staring at Elliot. Maybe they could sense his disdain for the scrawny brat.

“All of the dragons here belong to me,” Elliot said cockily. “You’re beneath them, so they won’t pay you any mind when I’m around. Even so—“ he motioned for the dragon to lower its head where the boy could reach, “I’ll let you pet her, just this once.”

The boy smiled and his eyes flickered from red to hazel. He pet the dragon and then brushed its cheeks until the dragon crooned. He spoke—in a heavy, horrible accent, but understandable Abrendese nonetheless, “Gaining the trust of ferals is impressive, since they don’t bond like elementals.” He looked to the back of the stables, where the kirins were resting from their morning jaunts. “Are those yours as well?”

“Every one of them answers to me,” Elliot replied with a white lie. “So don’t bother them.”

The child gave him a skeptical look before bounding to the light dragons. “No chance,” he said with a laugh, hovering at one of the pens. The kid was lucky. He had chosen his father’s dragon. “Get away from that one—“ but it was much too late for that.

He had already caught her attention and the kirin happily trotted over to the gate and whinnied softly. “Hello,” she chimed in a melodic voice. “I’m Lucille. You recognize elemental dragons like me? We knew you would have a good eye.” She stamped her foot once to show her excitement.

If kirins could smile, she certainly had one on. “That will come in handy later. All members of the St. James family hatch their own light dragons. One day you’ll be bonded to one of your own.”

The kid’s eyes glittered yellow. “It would be an honor to bond with one.”

Lucille snorted and gave him a stern glare with her goat-like eyes. She softly nudged the child’s head and then shook her neck towards the furthest corner of the stables. A pile of eggs had two kirins protectively standing nearby. They were looking nervously towards the others. “That’s where the eggs are. Go see if a hatchling is yours.”

He needed no further explanation and hopped to the eggs. The dragons knew Elliot disliked the child, but Lucille and her Rider took precedence. They tentatively allowed him to inspect the eggs. He quickly pulled one out—a light teal one, dappled in dark blue dots. “There is!” He said excitedly in his poor Abrendese. “It’s mine!”

A few dragons whinnied happily. Lucille’s scales grew brighter with pride. “See? You are a St. James. We light dragons have a destiny intertwined with yours.” He was still looking excitedly at the egg, giving her an opportunity to stare at Elliot. When she next spoke, it was half for the child and half for Elliot. “No matter what you look like, or where you’re from, we know your family when we see one.” The other elemental dragons grew at ease, recognizing a new member of the family; The ferals, on the other hand, grumbled as they sensed Elliot’s distaste.

The child’s eyes flashed red again. “Am not.”

“We’ll know if it doesn’t hatch, and then we’ll send you back for stealing the egg from someone who deserves it. Trying to steal, anyways.” He grabbed the egg out of his hands and felt its cold shell. “If this was really starting to hatch for you, it would be warm.”

“That’s not always true,” he replied, trying to swipe the egg back; Elliot simply held it out of reach from the small kid.

“It’s always true for light dragons. St. James’ dragons.” He dropped the egg and let him catch it. The child scowled at him, but he couldn’t complain. They were indestructible, after all. “Let’s say it does hatch–you would never get a light dragon. It doesn’t suit you. You’re ugly and far from charismatic, and we had to give you a new name as an attempt to make you fit in. Father will send you back to the desert once he gets over the loss of your whore mother, and then you can–”

Before Elliot finished his sentence, he felt a punch in his gut. He doubled over and the child kept punching. Lucille snorted at the two, “Stop it! Now!”

“You savage brat!” Elliot didn’t care if Lucille was watching; He pulled at the kid’s long hair and fought back. He easily pinned him down with the size difference and struck him as quickly as he could. The kid released the egg and let it roll to the side–then, just like that, there was a searing heat between them. Elliot jumped off and patted frantically at the embers on his coat. “What the hell did you do?!”

“Just a bit of magic.” The child picked up the egg and looked at him haughtily. Lucille stepped between them, long tail swishing angrily. “Oh, now you stop us. You didn’t feel like saying anything before,” he grumbled. “And where is Elliot’s dragon? If you have a good bond, shouldn’t they be helping you instead of Lucille here?”

“That’s enough from both of you,” she snapped and slammed down a hoof, ripples of light moving through the tiles of the stables. “You will both report to the dining hall and face severe consequences for this. Words are the blade of a noble, not fists or magic. You should have known when to sheathe your blade, Elliot; And you should have used it instead of brute force, Rory.” She flared her nostrils.

“Don’t even bother calling him by that name. He isn’t a St. James, his real name is–is–” he wracked his memory, but came up empty. “Forgettable. Just like him.” Lucille growled in a low, rumbling tone. Elliot knew her anger would reflect on his father and vice versa. They were in for a lecture.

“Fine,” the child replied. “I’ll use my words. Or, better yet, I’ll just hatch this dragon. If I’m able to bond with this light dragon, you’ll have to call me St. James. The bond is proof that I’m a member of the family.” He narrowed his eyes and smiled. “More so than you.”