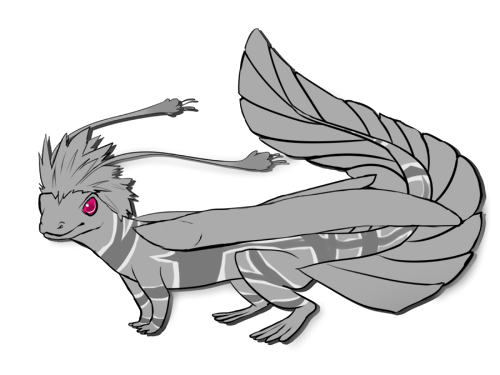 Chameleon is a complex marking that adds bright colors to your dragon. It first creates large bands on the legs and/or body of your dragon, with some splitting into a Y shape. It can also add a stripe down the side of the dragon which will end at the neck and the base of the tail. Then a border is drawn around this marking. You may choose to use just the shape or just the outline, rather than the whole set. There must be at least four bands visible on the dragon (or eight stripes if just using the outline).

Chameleon will always have a solid, hard edge.

You can see the markings a little more clearly below. The actual marking does not follow elemental color rules. It doesn’t matter if the inside is lighter or darker than the outside, as long as they are distinguishable. You may include subtle gradients on the inner parts of the marking.

You may choose for the inner color to fade away in during daily life art (and replace it with the border color) and flare back up when they become excited, just like a normal chameleon. This color change will not cause markings beneath it to appear.

Charged Chameleon currently has no effect.