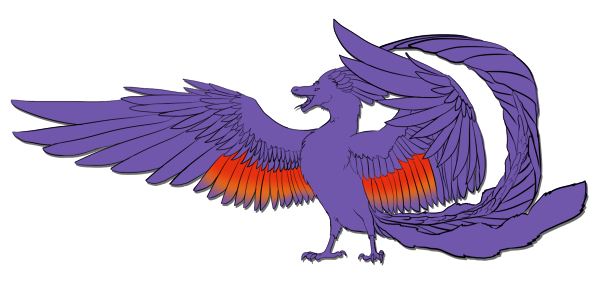 These are most visible while in flight and are based on the speculum feathers of birds. They should be on the bottom area of the wing close to the body and only on a SINGLE SIDE of the wing (you pick dorsal or ventral). You may include horizontal white, black, or brown banding like the speculum feathers of some ducks. The band itself should not extend to the bottom of the wings unless you create a black, white, or brown bar on the bottom edges of the marking. It will not appear anywhere else on the dragon and will not show on wingless dragons. They will create opaque patches on translucent wings, with dorsal and ventral sides showing a different color.

NOTE: ALL STRIPES MUST BE HORIZONTAL! These stripes show the direction that flight bars can go.

Flight bars will never appear vertical in relation to the wing. They will only be horizontal. The length and position is up to you, as long as there is one main bar and it is horizontal. You may have any number of black and white bars, but only one of them may be brightly colored. The brightly colored bar should not touch the bottom edge of the wings.

The edge of Flight Bars can be textured, a gradient, or solid.

Flight Bars may be any color within elemental rules. In addition, one central bar can show a gradient between any two colors. It can be affected by color modifiers. You may add white or black outline bars on the top or bottom of the marking. These outline bars can go out of range, as long as the marking covers less than 50% of the wing overall. Any sections that touch the edge of the wings will be white or black. Flight bars will create opaque patches on translucent wings, with dorsal and ventral sides of the colorful stripe showing a different color.
Here are some examples of how to create outlines on the Flight Bars:

Flight Bars may be layered in any order, but will not appear over Top-Layer Markings.

Flight Bars is restricted to the wings. It will not appear anywhere else on the dragon and will not show on wingless dragons.

Charged Flight Bars allows you to show the marking on both sides of the wing. Additionally, all bars may be any color.