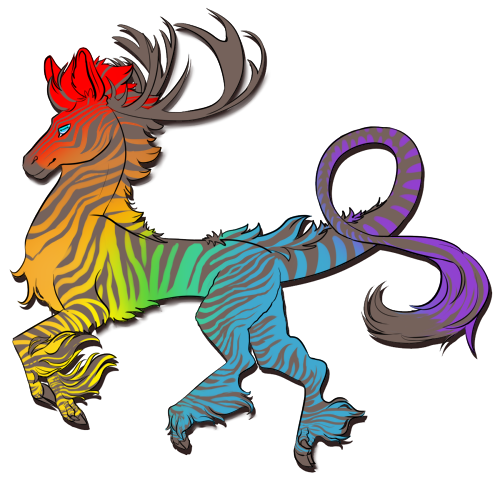 Spectrum modifies one display or modifier trait (that can be affected by color modifiers) and applies a smooth gradient to it. It will always affect the whole marking. It should only follow gradient orders that normal light would (red-orange-yellow-green-blue-indigo-violet). Saturation and brightness may also change (such as a light color to dark gray), as long as it is a smooth gradient and does not double back. Instead of using it on a display or modifier trait, you may instead change the base scale colors. Here is an example of the maximum gradient affecting the zebra marking:

A transition must be clear, even with markings on top of it or space between parts of the marking. It can start from one color and end up at the other, but will NOT create bars of one color or loop back. It does not have to go the full spectrum of light, either. The colors should appear to be a smooth gradient. Here are some examples of correct and incorrect Spectrums:

Here are some examples of different types of spectrums.

It does not follow elemental color rules.
Modifier, Claw, Leather, and Crest Rules

Charged Spectrum may affect two markings instead of one. Each marking may use its own color palette.