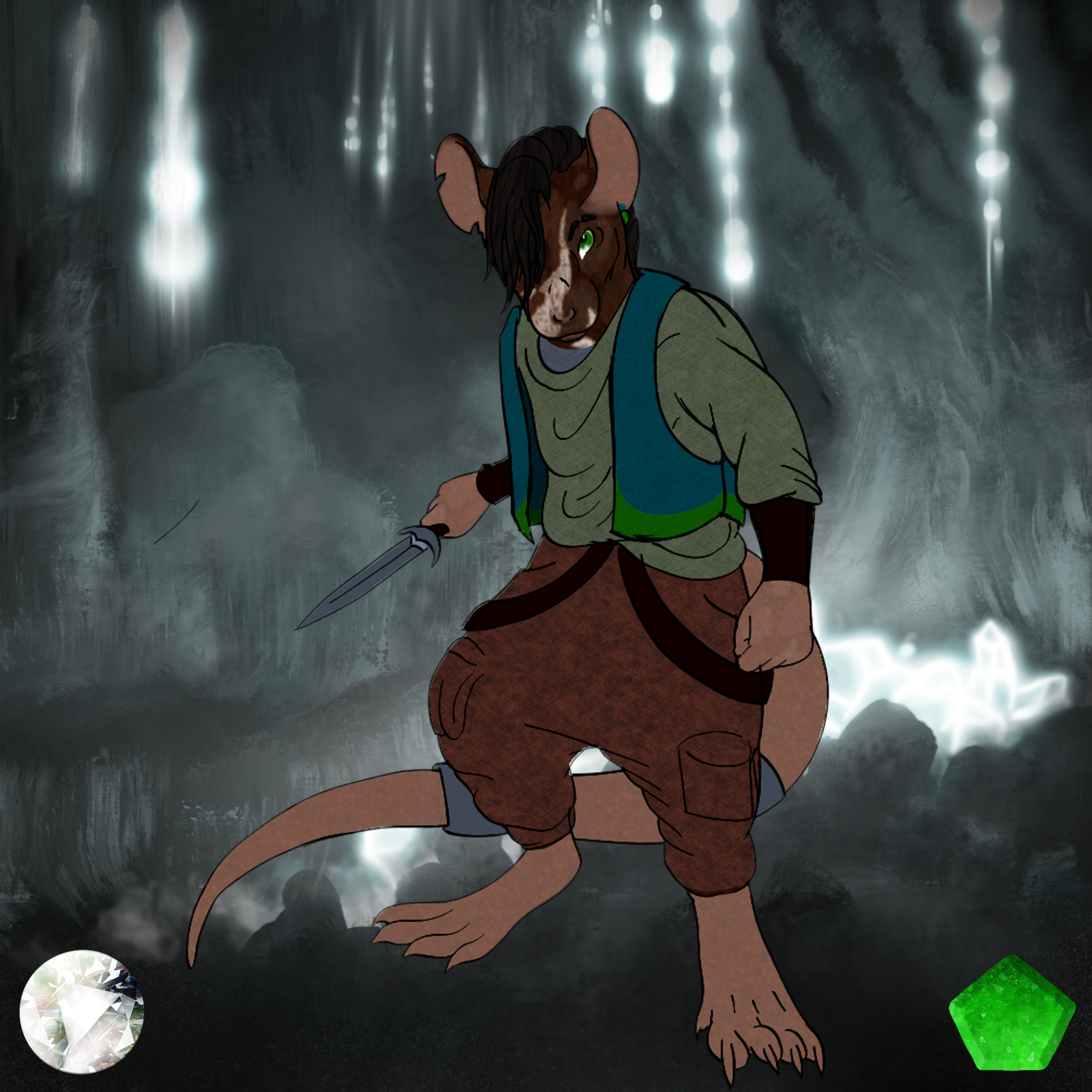 Bris, like his twin, knows well those who have power. Where Vicera tries to buy her way into their good graces Debris prefers to play their emotions and sensibilities against them. A consummate people-watcher Bris takes the time to observe his targets, but also has a backlog of basic ‘archetypes’ to pull from allowing him to garner sympathy in those he encounters, or play to their interests. He’s not above spinning a grand yarn, telling ladies how he lost his eye defending his lady faire before she scorned him for the injury or regaling bar patrons with tales of near-death struggles against beasts and assassins. He has a front and a face for everyone he meets, and plays his roles with theatrics and aplomb tat would make no few actors green with envy. He’s a shameless con-artist, and actor always alert for a mark to use his skills on.

Empathetic in the worst sense of the word Bris is highly attuned to the emotions of those around him, a tact wich allowed him to survive a constantly dangerous environment has turned to his advantage in being able to detect and adjust to those he sees on a dime and use their state to his advantage. Though this sometimes tires him out.

Oppertunistic is a survival trait in the slums of the world, and taking whatever Fate deigns to throw your way can save lives. These are lessons the world taught Debris early, and he will never look a gift horse in the mouth – at least not until he’s ridden far enough into the sunset to blind onlookers, anyhow. He’s not afraid to take a hand out so long as there are no strings attached, and he’s more than willing to play the  role of a beggar-man if it will benefit him more than some other role. This also lends itself to his being a consummate pack-rat however, as he comes from a background with literally nothing in modern times the rat is not one to get rid of anything. Even if it is junk Debris will often cling to things with a deathgrip, if only for the fact that it’s his and no one else’s. Both he and Vicera have stashes of things scattered throughout their routes and ranges, not simply piled in their ‘home base’.

While Viscera likes gems, gold and silver Debris has come to prefer textiles, and the bright color of glassware and beads. Having made a ‘stained glass’ wall in his room made from hung beads, bottles and glassware situated over the windows.

There is only one person who Debris truly trusts in the world, and that is Vicera. The two grew up and went through hell together, and he loves his twin more than anythin, and the two practically share a mind when they’re together.

Twin – Their is only one person whom Debris truly trusts anymore, and that is Viscera. The two grew up together, and went through hell to escape their childhood, he loves Cera more than just about anything, and the two almost seem to share a mind when together. Despite all his fronts he will slaughter a foe without a thought, and all to return hme to his twin at the end of a day. Few notice this trait beneath his masks and the quiet side which has crept into the once fierce buck. Making him quite meek compared to the Bris of Vicera’s childhood. He’s far more temperate, and attentive to the poor and downtrodden since joining the Skulkeen, especially children. Combined with his natural penchant as a listener Bris has become the more level-headed twin, and a solid backbone for the two. Keeping their respective hopes alive with his determination and devotion to his twin.

Ever since the accident-maybe even before- back when his mother started throwing those venom-laced insults his way, Debris started to doubt himself in some intrinsic way. It wasn’t that he didn’t think he could do things, he knew he could. He just couldn’t do them well enough. No matter what he did, how hard he tried, it was always somehow less than what he had been asked. With the loss of his eye this only worsened. Making him feel he was damaged goods and nothing more. Criticism can still send the outwardly calm Buck into a panic attack, even if he manages to hide it from the world. On the brighter side this lends to him being a fast learner, eager to do his best and dedicated to whatever task he sets himself to.

The rat becomes bored easily, and this is when he is at his worst. When Debris’ mind wanders he goes one of two directions, cruel or chaos. Memories intruding and hitting the doubts and nerves in his mind, or taking the boredom out just as he was always taught as a youngster – by taking it out on others. Neither ends well, so its best to keep him happy, distracted, and well occupied.